The End of American Made Jeans is on the horizon after Cone Denim Mills announces plans to close its White Oak Plant which produces U.S. made denim

This is no fabrication. A few weeks ago, I woke from a nightmare having dreamt Cone Denim, our main supplier of denim fabric, closed its doors and people were buying up everything down to bare shelves at our retail store. However, that was just a dream. Our denim supplier has been producing quality denim for over 125 years and has the oldest denim mill in the United States of America. A shut-down of its famous White Oak Plant which produces its U.S. made denim and is the last mill standing which makes selvage denim in the U.S.A. is very unlikely. Right?

The day before writing this, I saw a spike in sales and I thought, maybe it was due to results of articles being written from our press release a few days earlier. Later that night after work, my wife asked if I heard the news about Cone Mills White Oak Plant closing. I thought, clearly, she was mistaken and I went online to check it out.

If you are not familiar with Cone Denim Mills, they have been American’s leading supplier of high quality denim fabrics to apparel brands since 1891. Nearly all of the most popular and successful small to mid-sized domestic jeans makers in the United States rely on Cone Denim as a key supplier. At Williamsburg Garment Company, about 90% of the denim we use is American made Cone Denim. I stress the point that we use the American made denim because Cone branded denim is also manufactured in mills located in China and Mexico. I learned from dealing with import complications and extra cost, to walk into the Cone showroom or tradeshow booth and stress, only show me the new American made fabrics.

After doing some research and contacting Cone Denim, I was shocked to learn that Cone was indeed planning to close its 112-year-old White Oak Plant in Greensboro, North Carolina, which produces all of the companies American made denim and employs nearly 200 people. Initially, I hoped this was one of those times when an announcement is made for the closing or end of something that is very dear to a fan group, like Jay-Z’s Black Album. Closing announcements can sometimes be used to ignite sales, meanwhile re-organizing and re-opening is really what is planned.

I hoped and suspected something would be announced later like, deciding to downsize the White Oak Plant, or move the production to a new smaller more optimized manufacturing facility. However, after remembering International Textile Group, Cone Denim’s parent company was acquired via a Public-to-Private transaction in October 2016 by the investment firm Platinum Equity, I feared the worst, knowing the thinking behind money people. When its strictly about turning a profit, closing the least profitable parts of an operation, like the U.S. manufacturing to focus on the more profitable parts like the foreign manufacturing, is normal thinking.

This seems to be what may be happening as a rep at Cone Denim has informed me, “ultimately there will no longer be any denim (wide and selvage) produced in the USA after December 31, 2017. All denim operations will be focused out of Mexico and China.” 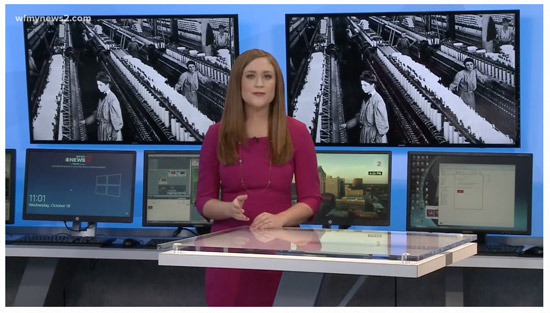 Will 2018 be the last time you can buy American made jeans manufactured with denim made in the USA?

I sat in the park later that day teary eyed in unbelief. Thinking this can’t be happening. Will 2018 be the last year to get truly American made jeans manufactured with denim made in the USA? Will the U.S. made denim supply runs out in 2018 and will American made jeans be defined from that point on as jeans sewn in the USA of Mexican, Japanese or China made fabrics?

Some 100 years plus of heritage could be wiped out by inventors looking to make profits with one dimensional thinking. I believe it should be as simple as optimizing the business to succeed in the way business is done today. Not to look on the surface and say this is profitable and this is not, cut out the non-and least profitable. With something this important to the country, I believe you have to find a solution to make it work. It boils down to the old saying, where there’s a will, there’s a way. Too often, money-types come in and take the easy route - stripe everything down, repackage and sell it off for profit, often destroying a brand on their way out.

In this case, they would be ignoring years of heritage and stripping the growing economy of small to mid-sized brands like ours who rely on U.S. made Cone Denim. We do business in today’s economy. Small batch, online, direct to consumer businesses that focus on making a better product. We helped to ignite the comeback of American made products after the down turn in the economy and after bigger brands move production overseas for higher profits.

I love Cone Denim. However, I’ve always thought they were under achieving as a brand. Often, big companies are too slow to modernize in changing times, or get stuck in a do-the-same-thing we’ve always done strategy. Today, more than ever, you have to think outside the box and clearly define your strengths and weaknesses. Which does not mean cut off your weaknesses and focus on your strengths. It means, be clearly aware of what they are, so you can make both work for you.

Bottom line, any type of business where deep American tradition gives it great value around the world, which produces some of the best product in the world, backed by more than 100-years of heritage and has a highly respected brand name, should be profitable. I believe taking advantage of the company’s strengths could help.

Bottom line, any type of business where deep American tradition gives it great value around the world, which produces some of the best product in the world, backed by more than 100-years of heritage and has a highly respected brand name, should be profitable. If a business which has been based in the U.S. for over a century can’t use those things to be successful. The size of a plant and order volumes may not be the problem. Looking into taking advantage of the company’s strengths could help.

Mostly hard-core denim heads and industry people are familiar with the brand, which is why after the announcement of the White Oak Plant closing, it took me a day to hear about it and I am one of the company’s customers and a player in the denim industry. In my opinion, this story is so big, it should be national news and running in CNN’s hourly rotation with the headline “Is this the end of American made Denim!”

In order for this to be a top story at CNN, MSNBC, Fox or the three major networks, do I, or someone else have to mention the connection with Wilbur L. Ross, Commerce Secretary of Trump’s famed Make America Great Again billionaire posse? In order to complete the merger transaction, Platinum Equity, acquired all of the debt and equity securities of ITG, previously owned by entities managed by W.L. Ross & Co. LLC and its affiliates.

Not saying that saying that the Commerce Secretary is at fault for the actions of who took over, but anytime an American Institution trades hands, you should have faith that the new tenant is going to take care of the place. And, if President Trump is truly trying to help American manufacturing, he and Mr. Ross needs to get some billionaires together that will put this thing back in the hands those who understand the importance of its American heritage and fix it.