Wearing and mastering the changes and rules that go along with owning a pair of raw denim jeans can be a chore to some, which is one reason some opt for pre-washed jeans. However, for raw denim aficionados, the rewards of naturally aging a pair of raw jeans out weights alternative.

People new to raw denim and those who love jeans, but only know them in the pre-washed form, often can’t tell the difference between a naturally aged pair of raw denim jeans and one that is purchased pre-washed. However, if you fall into this category don’t feel bad. You may be surprised to learn many of the people earning salaries as designers, editors and denim buyers at some of the largest department stores, publications and brands, making the decisions on what jeans are sold, seen and made, don’t know the difference either. I can’t tell you how many times one of the aforementioned asked about a pair my raw denim jeans (new / unworn) and referred to them as a dark wash.

Below, I placed two jeans side by side to compare a naturally aged jean which started as a pair of raw jeans and a premium washed jean, which was designed to replicate a dark aged jean and then I detailed the attributes. Both are Williamsburg jeans. Although we take pride in trying to recreate really authentic looking aged jeans, there is really just no substitute for the real thing. However, if you seek a worn, broken-in jean and don’t have the time or patience to weather a pair of raw, please opt for washed jeans with authentic looking attributes and try to avoid washed jeans which were meant to look aged but look more like jeans decorated with harsh white spots and lines drawn on them. 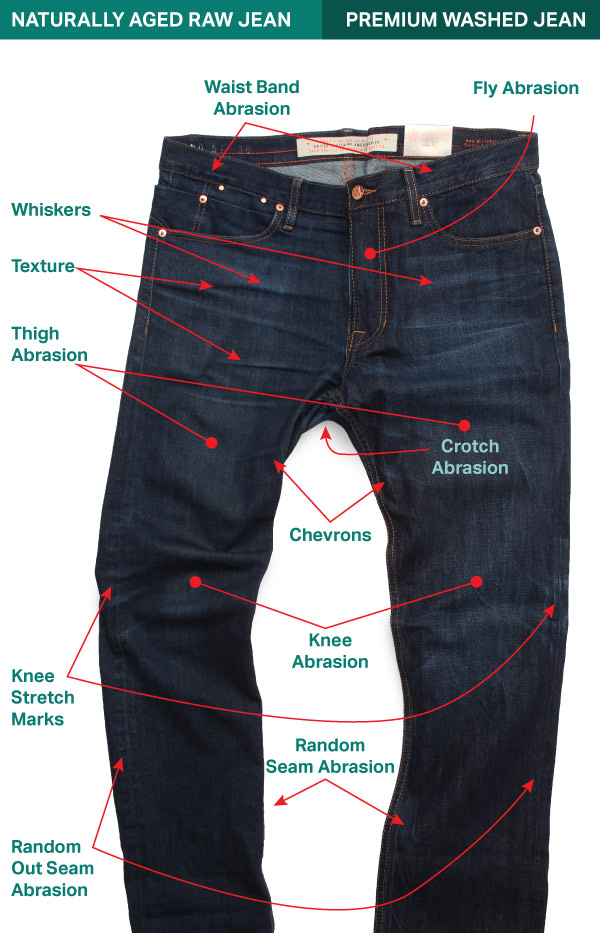 Named for the obvious reasons, whiskers are the most difficult to imitate and can be the defining detail that makes a wash look artificial or authentic. Real whiskers develop texture over time as the jeans tuck and fold in a repeated manner with the highest point receiving more abrasion removing more indigo and the lower less fiction staying darker. High stress at the hip area causes the fabric to bend in the horizontally. In early years of whisker reproduction, workers used clamps and tacks with resin to harden the texture in place, in attempt to give jeans a realistic look. The draw-back with making textured denim with resin is it weakens the yarns. Too much resin on jeans may look good, but the fabric becomes bridle and easily tears. About 2003, as I was seeking to create more authentic looking whiskers, I created a new way to add texture and natural shaped wrinkles to jeans which is now used at factories all over the world. You can read more about that on the Maurice Malone website.

The second most important parts of a denim wash are the thigh and seat abrasion. In general, these areas usually take the most beating, along with the knees. In hand sanding, the factory worker usually starts out making the whiskers followed by the thigh, then seat sanding. Lower quality washes often use sandblasting for speed. This is why with many low priced and mass market jeans, the aging at the thigh is bright white or looks like big spots. Sandblasting, although faster is harder to control in the manufacturing process. It also lays down an even amount of abrasion which doesn’t look natural. These areas are finished off with potassium to quickly fade sanded areas. Again, in lower price jeans, the chemical is sprayed on, while some higher priced manufacturing sometimes applies the potassium by brush for more natural uneven effect.

Chevrons are stretch marks at the inner thighs. They are usually more intense higher in the crotch and fade out closer towards the knees.

One of the characteristics routinely avoided in premium washes, but always seen on naturally aged jeans are stretch marks created by the stress of bending the knees. These marks usually extend over the outer seams and fade into the wrinkles at the rear side of the knees.

Not pictured, but sometimes added to washed jeans are the honeycomb like texture that forms at the rear side of the knees from walking and the sitting position. Wash factories tend to overdue effects more often than not and this feature is not so easy to replicate, so most of the time, the rear knees are either avoided or badly done. The worst example of this is the look of lines drawn at the rear sides of the knees, usually with the placement low on the calf.

Most often, this wearing away is seen on men’s jeans from the friction cause by wearing a belt.

Fly abrasion can take many forms, depending if the jeans have a button or zipper fly. It also depends how loose or tight the fit of the jeans is. When you see whiskers across the fly, it is being affected by the stress from the hips and this usually occurs with button fly.